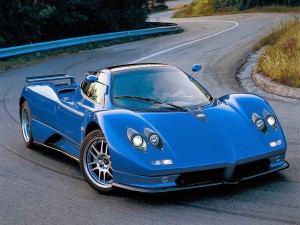 The story starts in 1955 in Casilda, Argentina when Horacio Pagani was born to parents of Italian ancestry. Like many youngsters, Horacio fell for cars and speed at an early age. Unlike many youngsters, Horacio promised himself that one day he’d build his own supercar. In 1983, he moved to Italy and found work collaborating with the team of designers and engineers building the Lamborghini Countach Evoluzione – the first car to feature a carbon fibre chassis. In 1991, Horacio established Modena Design on the outskirts of the city to accommodate increasing demand for design, engineering and prototyping services. In 1993, work began on the Pagani Zonda – Horacio’s dream is taking shape. In 1994, the tuning arm of Mercedes-Benz – AMG – agreed to supply Horacio with its 400hp, 7-litre V12 engine.

Finally, at the Geneva Motor Show in 1999, the Pagani Zonda C12 made its debut and stunned the crowds. With its mid-mounted V12 engine and carbon fibre monocoque chassis, the Pagani is a work of art with almost everything made and designed in-house. Brand new for 2016 is the Pagani Huayra BC and is the most technologically advanced Pagani yet. Equipped with a carbo-titanium monocoque chassis and a 552hp 6-litre V12 engine, the ‘BC’ is so named in honour of Benny Caiola who made history in becoming the first ever purchaser of a Pagani automobile.