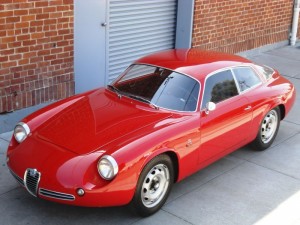 Born in Gavello in the Veneto region of Italy in 1890, Ugo Zagato was the youngest of five brothers. Barely out of his teens Ugo’s early employ was with Carrozzeria Varesina in Varese, just North of Milan but he left after a few years to join aircraft builder Pomilio based in Turin. In 1919, Zagato set up a workshop in Milan and established Carrozzeria Ugo Zagato as he was convinced he could transfer what he’d learned from aircraft production to the automotive sector. 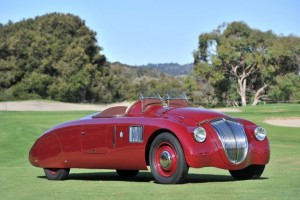 This desire came to fruition in 1922 with a Fiat 501 – Zagato’s weight saving body with fluid lines being a revelation. It would be Alfa Romeo that would next receive the Zagato treatment with the 1925 1500. Zagato’s two sons Elio and Gianni would join their father to work in and learn the business in the late 1940s. Aerodynamics were critical to successful race cars and 1955 premiered the Fiat Abarth 750 Zagato. These tiny, charismatic cars were race winners from the start with the 750 being nicknamed ‘DoubleBubble’ for its distinctive roof humps. This characteristic would subsequently become a Zagato trademark. The company continued to work with many manufacturers including Ferrari, Jaguar, Lancia, Bristol and Rolls Royce.  Many concept and small run production cars followed.

Today, Zagato is run by Elio’s son, Andrea, providing automotive, transportation and product design solutions whatever they may be.